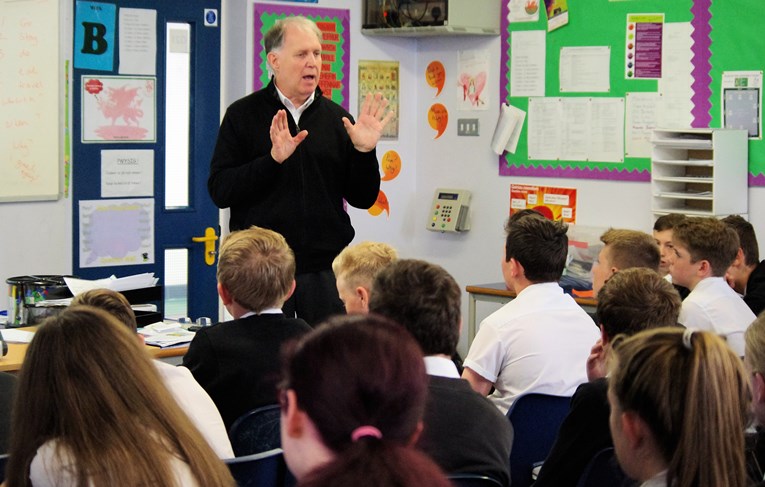 Tim Penn’s sought-after British-made products are loved by the fashion world and used by eventing, dressage and show-jumping riders along with motor sports enthusiasts.

From his base in Corwen Tim runs Signature Leather, which he set up in 2005 following a successful career on the racing circuit, when he competed at Ascot and race tracks across Europe.

His equestrian career also included a spell with a top trainer at Chantilly near Paris, the home of the French Derby, and where his love for languages was sparked, as he mastered French. He went on to study German and then later gained both a teaching qualification and an MBA from Durham University.

Signature Leather’s gloves made from Ethiopian cabretta hairsheep skin are now stocked in Germany, Hong Kong and America, but Tim still finds time to work with the Welsh Government as an ambassador for modern language education.

His latest visit was to Ysgol Emrys ap Iwan where he spoke to Year 8 and Year 10 learners about the importance of languages.

Tim said: “It’s a privilege to meet teachers and pupils supporting the Welsh Government Global Futures initiative launched in order to counteract the fact that the number of pupils studying Modern Foreign Languages in Wales at GCSE has dropped by 50 per cent over the last 10 years.

“The government is concerned that Welsh youngsters are looking inward and not outward – we’re bringing to their attention that the fact that they have been born and brought up in Abergele does not mean that’s the end of their journey as there is a big wide world out there.

“Teachers feel that the support of a representative from the world of work reinforces their efforts in illustrating the benefits of becoming modern global communicators.

“I use the format of an informal conversation with the pupils and they have my background information first, including the fact that I manage my near 100% export business from a rural Welsh base in Corwen so they know who I am and we can then discuss why studying MFL will provide them with a sought after skill.

“Surprising the teachers with role plays in French or German, that they have no warning of until we start talking in class, proves very effective as the pupils enjoy seeing the language being used spontaneously.

“Pupil feedback on such visits shows that they capture the imagination of pupils, allowing them to realise the importance of MFL in the workplace, and suggesting new opportunities to compete successfully in an increasingly globalised business economy.”

Ysgol Emrys ap Iwan head of modern foreign languages Siân Dolben said: “Tim was excellent and really showed the learners the benefits of being able to communicate in languages other than English and Welsh.

“As well as being able to travel, speaking French, German or Spanish gives them a real advantage with work, either based abroad or here in the UK.”

Tim admits that he left school at 16 with more passion to be a jockey than to learn a language.

He said: “I founded my first export company in 1979 and ended up developing business world-wide including trading across Europe where the ability to communicate  with customers in French and German proved indispensable.

“A lot of pupils just don’t know what options are out there for them. Some talk about joining the Army but don’t know that if they do that today with 2 A levels in Modern Foreign Communication skills like French or German that they might be entitled to a £10,000 ‘golden hello’ to take those skills into the military.

“Others have told us that they didn’t know about university exchange schemes until they got to university and that if they had done they might have studied a language in preparation.”

Tim, who has also worked with design students at Coleg Cambria, added: “I don’t actually have to be there making the gloves so I have time to dedicate to this role.  Having had many years enjoying the opportunity of working internationally myself, it’s very rewarding to now encourage young people to look at the world through a wider lens.”

Ysgol Emrys ap Iwan head teacher Lee Cummins said: “Tim is a great example of how a passion, such as his love of horses, can be used to create a successful business.

“He was also able to demonstrate to the learners that his language skills are helping to deliver that success, and I hope it will inspire them to choose languages as one of their options.”